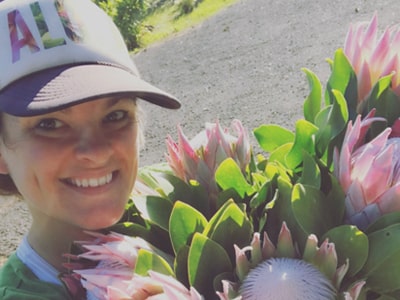 Meet Emily, one of the new owners at Anuhea Flowers! She has worked with Judy and Bill Mertens, the previous owners of Anuhea Flowers, since 2015 when she moved to Maui from Denver, Colorado. More on the history and connection between the Merten’s and Emily (here). Emily’s background is in education and she began by helping out seasonally at the farm with Bill and Judy, her hanai family (Hawaiian for adopted family), making wreaths and arrangements while she continued her career in the schools. Under their guidance and teaching, she quickly grew into the business and loved the creative outlet it provided, working with her hands and the flowers in such a beautiful setting, sharing such beauty, comfort, and joy with others, and learning all the aspects of the business and farming. She took on more and more responsibility and as Bill and Judy got closer to retirement, the opportunity to purchase the business became a possibility in early 2018. Emily met Tasha, her business partner and now co-owner of Anuhea Flowers, at a school they were both working at and knew she would be up for the challenge of taking over a business and the hard work of running a 12 ½ acre farm; she is ever grateful she said yes to being her business partner; otherwise this dream wouldn’t have become a reality. They both worked tirelessly and very closely with Bill and Judy at the farm and transitioned ownership in the sale of the business at the end of September 2018. For her, it’s an honor to carry on the legacy of such wonderful people as Judy and Bill and to embark on a new adventure with her partner Tasha as they continue to build Anuhea Flowers, reinvest in the Aina through Hawaiian Agriculture, and create the vision of Anuhea Flowers today.